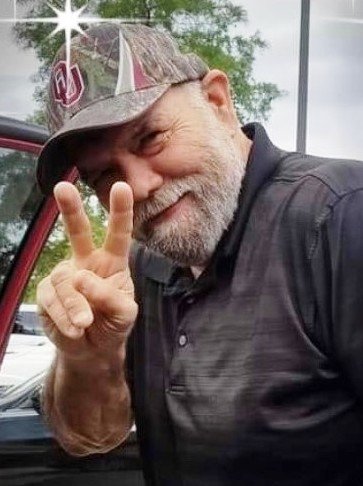 Please share a memory of Floyd to include in a keepsake book for family and friends.
View Tribute Book
Floyd Eugene Justice, age 64, departed this life peacefully the morning of February 14, 2021 in Ardmore, Okla. Graveside services will be 2:00pm, Monday, February 22, 2021 at Hillcrest Memorial Park. Floyd was born in Ardmore, Okla. on January 21, 1957, to Floyd Earl Justice and Virginia Pearl (King) Justice. He attended and graduated from Dickson High School. He married Shirl Ann Abney on September 20, 1974, in Ardmore, Okla. Floyd was a professional butcher and worked for the local grocers for many years and for a time had a meat market in Davis, Okla. He retired due to his heath in 2014. Floyd married Annette Brown on October 26, 2007 in Gainesville, Texas. When given a chance, he loved to go fishing and was an avid OU Sooner Fan. He was preceded in death by his parents and his first wife. Floyd is survived by his loving wife, Annette Justice, of the home, daughters, Heather Justice, of Oklahoma City, and Chrissy Justice, of Tulsa, Okla. Siblings; JoAnn Gratner of Dickson, Sheryl Clark and husband Rick of Dickson, John Preston of Dickson and Charles Preston and wife, Shelley, of Dickson, Okla., step-daughter, Carla Loughridge of Ardmore, his three canine children, Boo-Boo, Zayne and Killer and numerus grandchildren, great-grandchildren, nieces, nephews and a host of family and friends. The family requests that those in attendance at the funeral service social distance and wear masks.
To send flowers to the family or plant a tree in memory of Floyd Justice, please visit Tribute Store
Print
Monday
22
February