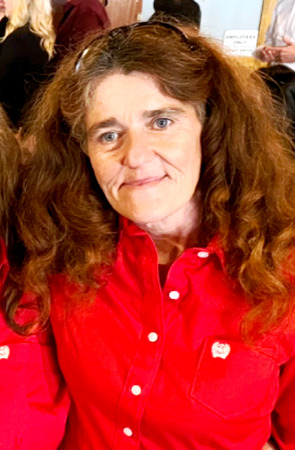 Please share a memory of Rhonda to include in a keepsake book for family and friends.
View Tribute Book
Rhonda Jean Howard, age 54, passed away on December 20, 2022, in Marietta, Okla. Funeral services will be held at 10:30 AM, Wednesday, December 28, 2022, in The Chapel at Griffin~Hillcrest of Ardmore, Okla., with The Reverend Bobby Freeman officiating. Interment to follow in Rose Hill Cemetery, Ardmore. Rhonda was born on December 1, 1968, to Marvin L. “Pee Wee” Faulkner and Judy (Glover) Faulkner. She married Jack Howard on March 22, 1987, in Marietta, Okla. She worked at the Touso Ishto Bingo Hall in Thackerville, Okla., and then became a homemaker. She enjoyed her time at the casino gambling. When given a chance, she would go fishing and loved to work with her hands at arts and crafts. Rhonda loved her dogs and spending time with her grandchildren. She was preceded in death by her parents. Rhonda is survived by her husband, Jack Howard, of the home, two sons, Jackie Howard Jr. and Rusty Howard, and one daughter, Heather Howard, all of Marietta. Six grandchildren, two sisters, Robin Howard and husband, Mike, of Marietta, Okla., and Roberta Dyer and husband, Doug, of Fairview, Texas. Numerous nieces and nephews, and a host of family and friends. Those serving as casket bearers will be Nick Ahrens, Grant Morrison, Cody Dyer, Nick Stephens, Chris Falkner, and John Falkner. Honorary casket bearers will be Jason Falkner and Rick Freeman. Visitation will be Tuesday, December 27, 2022, from 6:00pm to 8:00pm at Griffin ~ Hillcrest Funeral Home.
To send flowers to the family or plant a tree in memory of Rhonda Howard, please visit Tribute Store
Print
Tuesday
27
December