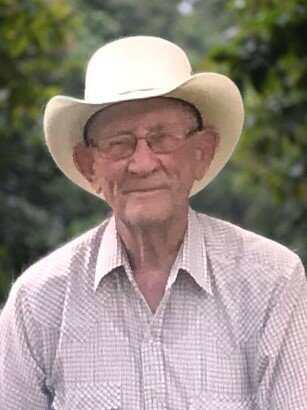 Please share a memory of Charles to include in a keepsake book for family and friends.
View Tribute Book
Charles David (Charlie) Watson, age 96, completed his life journey on December 6, 2022 in Tulsa, Okla. surrounded by family. Funeral services will be held at 10:30 AM, Wednesday, December 14, 2022, in The Chapel at Griffin~Hillcrest with Pastor Gary Gunsolus officiating. Interment services will be held at 2:00 PM at Highland Cemetery, Durant, Okla., with Pastor Bruce McLaughlin officiating. Charlie was born on August 15, 1926 to Felix and Annie Mae (Welborn) Watson in Clarksville, Texas. Charles began first grade at White Rock School near Clarksville. His family later moved to Bryan County Oklahoma where he attended school at Pleasant Hill and Caddo. After graduation from Caddo High School, Charles moved to Portland, Oregon. He attended school to learn welding and went to work at the shipyard. After returning to Oklahoma for a short time, Charles joined the United States Navy and headed to the West Coast again, this time to San Diego, California. While in the navy, he learned drafting and mechanical drawing. After his service in the Navy, Charles returned to Durant, Oklahoma and enrolled at Southeastern State College. It was in Durant where he met the love of his life and future bride, Beulah (Bea) Eddins. On July 3, 1948, they were married in Denison, Texas, and from that union came their two children Michael and Karen. Charles's children, grandchildren, and great- grandchildren were his greatest joy in life. He loved being Papa. Charles worked in the newspaper business for many years, including over 20 years at the Daily Ardmoreite. He made a mid-life career change and went to work in the maintenance department of Michelin Tire Company. He enjoyed his work at Michelin where he was able to utilize his mechanical ability and skills and where he met many lifelong friends. After retirement from Michelin, Charles and Bea enjoyed traveling in their RV. They became "Winter Texans" spending their winters in the Rio Grande Valley. In the summers, if they weren't at home, they probably could be found at Lake Texoma camping, fishing, boating, and visiting with friends and relatives. Charles loved and excelled in many sports and games. He was an outstanding skater when he was a young man. Later he excelled in water skiing especially on a slalom ski. He could jump wakes and almost touch his shoulder to the water while laying the ski over. He seldom could be beat at throwing darts, shooting pool, playing shuffle board, or playing table tennis, and he was a master at throwing bean bags. Charlie was also very tough to beat at any card game, dominoes, or board games such as Pegs and Jokers. Charles had a passion for classic country music. At 79 years old, he learned to dance, and he became quite good. He learned the 2-Step, Waltz, Schottische, Polka, and several line dances. He loved to put on his boots and cowboy hat and go to dances at the various senior citizens centers, and he especially enjoyed going to the dances at Springdale. Charles had numerous friends he met through dancing, and who shared his love for country music. Charles is preceded in death by his wife, Bea; parents, Felix and Annie Mae Watson; sisters, Mae Bratcher and Joyce Colburn; brother, Dale Watson He leaves behind his son Michael Watson and wife, Terri of Skiatook, Oklahoma; daughter Karen Lewis and husband Tim of Ardmore; Grandsons David Childress and wife Jess of Washington, Oklahoma; Chad Watson of Owasso, Oklahoma; Cory Watson of Owasso, Oklahoma; Derek Willyard and wife Shaye of Owasso, Oklahoma; Granddaughters Nikki Watson of Norman, Oklahoma; Chari Wheeler and husband Danny of Overbrook, Oklahoma; Brother Felix Watson, Jr. and wife Darla of Moore, Oklahoma; Sister Sharon Allen and husband Ted of Hot Springs Village, Arkansas; and great-grandchildren Kylie, Cole, and Maddie Childress; Trinity and Nikki Cassell; Grant Duncan; Uriah and Abel Willyard. Those serving as pallbearers will be David Childress, Chad Watson, Cory Watson, Derek Willyard, Nikki Watson and Chari Wheeler. A visitation will be held from 6:00 pm until 8:00 pm, Tuesday, December 13, 2022, at Griffin~Hillcrest.
To send flowers to the family or plant a tree in memory of Charles Watson, please visit Tribute Store
Tuesday
13
December

Share Your Memory of
Charles
Upload Your Memory View All Memories
Be the first to upload a memory!
Share A Memory
Send Flowers
Plant a Tree