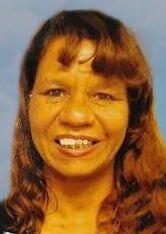 Please share a memory of Deborah to include in a keepsake book for family and friends.
View Tribute Book
Deborah Kay Burns, age 51, passed away on May 6, 2022, in Oklahoma City, Okla. Graveside services will be held at 2:00 PM, Tuesday, May 10, 2022, at McMillan Cemetery, Marshall, County with Dr. Alton Fannin officiating. Deborah was born on July 29, 1970 to David Eugene Burns and Starla Elaine (Bryant) Burns at the Seventh-Day Adventist Hospital in Ardmore, Okla. Deborah attended Ardmore City Schools and later earned her GED and enrolled in classes at Ardmore Higher Education Center. She went to Beauty School in Oklahoma City and enjoyed her career as a beautician, eventually owning her own salon. Deborah was a hard worker always trying to improve the quality of life for herself and her family. At the time of her death, she was a resident of Wayne, Okla. Deborah was preceded in death by her parents, sister, Brenda Burns, and two infant sons, Tevyn and Decaven. Deborah is survived by her three sons, Rodney Burns, Skyler Burns and Desmond Williamson, all of Wayne, Okla., brother, Deava Webb, of El Reno, Okla., and Uncle Robert Burns, of Ardmore, Okla., two granddaughters, who was her sun and moon, and many cousins and friends. A visitation will be held from 6:00 pm until 8:00 pm, Monday, May 9, 2022, at Griffin~Hillcrest Funeral home.
To send flowers to the family or plant a tree in memory of Deborah Burns, please visit Tribute Store
Print
Monday
9
May