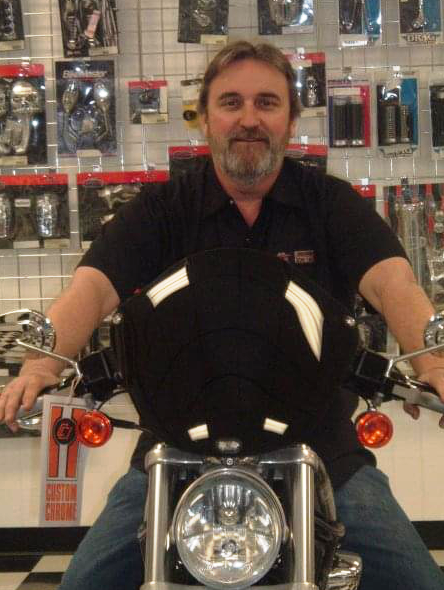 Please share a memory of Larry to include in a keepsake book for family and friends.
View Tribute Book
Larry Gene Edmonds, age 63, passed away on November 4, 2021, in Oklahoma City, Okla. A private family service and public memorial service will be held at a later date. Larry was born on June 15, 1958, to Charles Eugene Edmonds and Carol Alyce Edmonds in Wichita Falls, Texas. He attended Ardmore and Plainview Schools. Larry worked in construction for many years as a cabinet maker and was a Journeyman Millwright. He married Andrea Deatherage on June 12, 1979, in Gainesville, Texas. In 1997, he opened and operated Longhorn Scooters Motorcycle Shop in Lone Grove, Okla. In 2007, they moved the shop to Ardmore, Okla. Larry loved to sing and play guitar. He played guitar at the Cowboy Church in Gene Autry. Larry had a passion for motorcycles, especially Harley Davidson Motorcycles. He enjoyed travelling and long bike rides with his wife. He is preceded in death by his parents. Larry is survived by his wife, Andrea Edmonds, son, Matt Edmonds, daughter, Alycia Taylor, and husband, Chris, all of Ardmore, four grandchildren; Liam Taylor, Joshua, Jackson, and Jakoby Edmonds, his sisters, Lisa Armstrong, and husband, James of Lone Grove; Caryn Harper, and husband, Johnny, of Marietta, Okla.
To plant a beautiful memorial tree in memory of Larry Edmonds, please visit our Tree Store

Look inside to read what others have shared
Family and friends are coming together online to create a special keepsake. Every memory left on the online obituary will be automatically included in this book.
View Tribute Book
Services for Larry Edmonds
There are no events scheduled. You can still show your support by planting a tree in memory of Larry Edmonds.
Plant a tree in memory of Larry

Share Your Memory of
Larry
Upload Your Memory View All Memories
Be the first to upload a memory!
Share A Memory
Plant a Tree