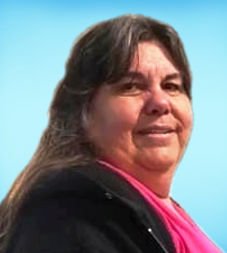 Please share a memory of Denise to include in a keepsake book for family and friends.
View Tribute Book
Denise Gail Skinner, age 62, passed away on June 14, 2021, in Ada, Okla. Graveside services will be held at 10:30 AM, Thursday, June 17, 2021 at Legate Cemetery, Ardmore, Okla. with The Reverend Steve Skinner Officiating. Denise was born on July 2, 1958 to Holmes Daniel McCurtain and Glennda Faye McCurtain, in Ardmore, Okla. She attended and graduated from Marietta High School in May of 1976. She Married Raymond “Steve” Skinner on December 19, 1975. She was the manager of Marietta Pizza Hut until she and Steve felt the calling to serve the Lord. She then served as the Secretary for the Solid Rock Church in Ardmore, Okla. Denise will be remembered as a rock hound, anytime she could take a walk to commune with nature she would be picking up a rock or cleaning up Mother Nature by recycling cans. She loved spending their vacation time with Steve, traveling through out her favorite state of Arkansas. Denise had a dedicated heart to her Lord and her children. She was preceded in death by her parents, uncle, William Benjamin Dickson, and two grandchildren, Justin Mosher and Ariana Mosher. Denise is survived by her husband, Raymond “Steve” Skinner, daughters, Kristy Skinner-Keith and husband, Chris and Stephanie Skinner-Felice, four grandchildren; Brandon Skinner, Richard Sisson, Kristen Sisson, and McKayla Sisson, eight great- grandchildren, two brothers, Glenn McCurtain and wife, Mary Grace, of Marietta, and Chris Allen McCurtain and wife, Patricia, of Overbrook, Okla., one sister, Gina Luper and husband, Rannie, of Carnegie, Okla., aunt, Geraldine Reece and husband, Roy, of Overbrook, and numerous nieces, nephews, and a host of family and friends. Serving as Pallbearers will be; Brandon Skinner, Richard Sisson, Justin Bryer, Chris Keith, Tony Keith and Garrett Willis Visitation will be from 6:00pm until 8:00pm, Wednesday, June 16, 2021 at Griffin ~ Hillcrest Funeral Home.
To send flowers to the family or plant a tree in memory of Denise Skinner, please visit Tribute Store
Print
Wednesday
16
June