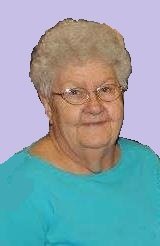 Please share a memory of Glennda to include in a keepsake book for family and friends.
View Tribute Book
Glennda Faye McCurtain, age 83, passed away on Friday, March 26, 2021, at Ardmore, Okla. Graveside services will be held at 10:30 am, Monday, March 29, 2021, at Enville Cemetery, Enville, Okla., with Pastor Steve Skinner officiating. Services under the direction of Griffin~Hillcrest of Ardmore. Glennda was born on August 5 1937, in Odessa, Texas, to Jepthy Glenn Dickson and Audra Faye (Sampson) Dickson. The family moved to Oklahoma and lived in Woodford, Madill, and Lebanon. She was a graduate of Madill High School with the Class of 1955. She married Holmes Daniel McCurtain at Lebanon, Okla., on June 12, 1955. Glennda worked as a waitress and always found work as the family moved throughout Oklahoma and Texas. In 1972, she became the cook at Greenville Elementary Schools at Greenville, Okla., and then for the Nutrition Center at Marietta, Okla. In 1998, she began working at Pizza Hut where she worked until she was injured and could no longer work. Glennda was an avid reader and enjoyed solving crossword puzzles. She would spend much of her time studying her Bible. She will be remembered as a good cook. She was preceded in death by her parents, her husband, and great-grandchildren, Justin Wayne Mosher and Ariana Bliss Mosher, and brother, William Benjamin Dickson. Glennda is survived by her son, Glenn McCurtain and wife, Mary Grace, of Marietta, daughter, Denise Skinner and husband, Raymond “Steve”, of Ardmore, son, Chris Allen McCurtain and wife, Patricia, of Overbrook, Okla., and daughter, Gina Luper and husband, Rannie, of Carnegie, Okla. Grandchildren: Christopher, Jennifer, Kristy, Stephanie, Matthew, Ashley, Shilo, Keisha, Cory, and Kayci. Thirteen great-grandchildren and eight great-great-grandchildren. Sister, Geraldine Reece and husband, Roy, of Overbrook, and numerous nieces, nephews, and a host of family and friends. Condolences may be left at www.griffinhillcrest.com.
To send flowers to the family or plant a tree in memory of Glennda McCurtain, please visit Tribute Store
Monday
29
March