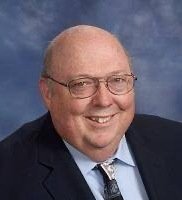 Ed was born in Bellflower, Calf., on August 10, 1957, to Gorald Deviau Harwood and Pearl Merle (Howard) Harwood.  He attended Santa Ynez Valley Union High School in California and went on to attend and graduate from Liberty University with a degree in Divinity. He served his country in the United States Navy and was honorably discharged in 1984. Ed then moved to Wynnewood, Okla., working as a police officer and doing prison Ministry. He was also working as a CPA during tax season. Ed moved to Ardmore in 1994 and took a position with the Ardmore Police Department. He met his wife, Phyllis Collins, who was the dispatcher for The Ardmore Police Department at that time. They were married on September 21, 1996, in Phyllis parents’ home. Ed retired as a Captain in 2010, after serving 16 years to the Ardmore Community.

With his call “W5CVE” Ed loved operating ham radio’s since the age of 17. He taught many people and tested them for the licensing as operators. He helped many people get into operating the radios and repairing them. Ed will be remembered for all his pranks.

He was preceded in death by his parents.

Ed is survived by his wife, Phyllis Harwood of 23 years, children, Kimi Harwood, of Minnesota and Angel Mitchell, and husband Mitch, of Brunswick, MD., grandchildren, Tamra and Legend, one brother, Don Whitaker and wife Laquita, of Wynnewood, Okla., three sisters, June Mize and husband Richard, of Millcreek, Okla., Katy Yarbro and husband John, of Twin Falls, Idaho., and Linda Cook and husband, Jack, of Midwest City, Okla. and a host of family and friends.

A Celebration of Life

Share Your Memory of
Edwin
Upload Your Memory View All Memories
Be the first to upload a memory!
Share A Memory
Plant a Tree