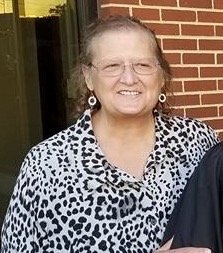 Please share a memory of Jacqueline to include in a keepsake book for family and friends.
View Tribute Book

Funeral services will be held at 10:30 AM, Friday, August 4, 2017, in The Chapel at Griffin~Hillcrest with Reverend Ted Clark Jr. officiating. Private interment at Woodford Cemetery.

Jacqueline was born in Tyler, Texas on January 3, 1955, to Argus Johnston and Ruby Johnston. She married Billy Wood on July 3, 1972 in Ardmore, Okla. She attended Ardmore Schools. Her hobbies included fishing and working in the yard. Jacqueline played the keyboard at the West Gate Christian Center Church, was a lay minister and took care of the churches books and many other church duties.

She was preceded in death by her parents, infant son, Billy Wood Jr., and one sister, Jean Ann Johnston.

To send flowers to the family or plant a tree in memory of Jacqueline Wood, please visit Tribute Store
Friday
4
August