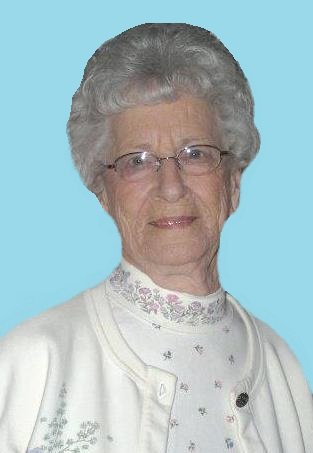 Please share a memory of Dolores to include in a keepsake book for family and friends.
View Tribute Book

Dolores Broderius, age 94, passed away on Sunday, June 25, 2017, in Billings, Montana. Funeral services will be held at 10:00 AM, Saturday, July 1, 2017, in The Chapel at Griffin~Hillcrest, Ardmore, Okla. with Dr. Walt Spradling officiating. Interment to follow at Hillcrest Memorial Park.

Dolores was born on October 30, 1922, in Bijou Hills, South Dakota.  She was the ninth of eleven children born to Albert and Trina Vander Voort.  She spent her younger years in South Dakota and graduated from high school in Platte, SD.  Dolores later moved to Minnesota where she met and married Wilbert Broderius after he returned from serving in World War II.  They moved to Chester then Kalispell, Montana and then to New Rockford, North Dakota, farming at each location.  Dolores worked as a nurse’s aide in Sherman, Texas, and finally as an apartment manager at Willowbrook Apartments in Ardmore, Oklahoma.  After retiring she moved to Colorado Springs, Colorado, and then to Billings, Montana, to be near her family.  Dolores passed away at Billings Health and Rehab on June 25, 2017.  Her entire local family of children, grandchildren, and great grandchildren were able to visit her on that afternoon.

Dolores was a strong and courageous woman.  She met adversity head on and dared it to defeat her.  Her heart was always soft toward those in need, and she took personal action to help them.  No one doubted her toughness, yet she won the hearts of all who became close to her.  She loved animals, especially dogs, and loved her almost daily trips to McDonald’s for a Caramel Frappe.  She was an avid reader and enjoyed puzzling. Dolores’ family would like to thank the staff and management of The Tender Nest Assisted Living for over eight years of exceptional loving care.  We would also like to thank the staff of the Pearl Memory Unit at Billings Health and Rehab for your incredible loving care and concern during Dolores’ final days.

She was preceded in death by her parents, her husband, Wilbert, her daughter, Pamela, five brothers, and four sisters.

To send flowers to the family or plant a tree in memory of Dolores Broderius, please visit Tribute Store
Saturday
1
July