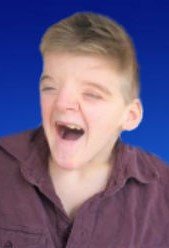 Please share a memory of Travis to include in a keepsake book for family and friends.
View Tribute Book
Travis Brian Harrington, passed away on November 16, 2020 in Dallas, Texas at the age of 33. A special memorial service remembering both Travis and his grandfather Al, will be held at 2:00 PM, Saturday, January 9, 2021 in The Chapel at Griffin-Hillcrest Funeral Home in Ardmore, Okla. Travis was born in Brownsville, Texas on December 10, 1986, Travis was the son of Beverly Leaman Harrington and Richard Darrell Harrington Jr. His life was a miracle from the onset. Born nonverbal with cranial facial abnormalities, cerebral palsy, amongst other disabilities, Travis spent many of his first years of life undergoing countless surgeries to help his body adjust to the outside world. The years that followed were full of constant trips to the doctor or hospital, challenging feeding times, the realization of long-term diapers, medical expenses, physical therapy sessions, and appointments where Travis would get fit for a new wheelchair, walker, or braces for his legs. Much of his childhood apart from his disabilities was defined by playing with trucks and cars, his first love, spending time outside, making friends, and watching movies. Outside of those interest, his love for the outdoors, riding in the car with his head out the window, or spending time with his friends, Travis loved going to school and participating in Special Olympics. Travis’s smile was its biggest and brightest each morning when the bus came to pick him up from our house. The joy from riding the lift and seeing his friends is etched in our minds. School was a place where Travis met like individuals with ranging abilities and had the opportunity to grow life skills outside of the home until he aged out. It was at school that Travis became involved in Special Olympics and spent many years competing in various events. His favorite, the weekly bowling league that he often won. Travis’s life was a constant reminder of God’s goodness and grace. A life not meant to survive the day he was born, yet a life that brought immense love and joy to all those around him. Even in his disability, with his differences, or through his pain and suffering, Travis was full of love. He was a simple man with a big heart. He loved people unconditionally and gave love abundantly to all who would take it. He spent the last several years of his life with people who loved him back with the same intensity, sprinkling his joy everywhere he went. We are so grateful for The Park in Plano and the care he received there. Travis was preceded in death by his grandfather Richard Darrell Harrington Sr. of Pryor, Okla. who died March 30, 2019, and succeeded in death by his grandfather Al Maurice Leaman of Dallas, Texas who died on December 6, 2020. Travis is survived by his mother, Beverly Leaman Harrington of Corpus Christi, Texas; father, Richard Darrell Harrington Jr. of Vinita, Okla.; sisters, Hannah Marie Harrington of Tulsa, Okla., Rebekah “Annie” Jones and husband Ross of Dallas, Texas; Grandparents, Marillyn Sue Seeberger and husband Rudolph “Gus” of Dallas, Texas; and Grandmother Gloria Ann Harrington of Pryor, Okla.. In lieu of flowers, the family is requesting donations be made to the Special Olympics of Okla. so Travis’s peers can experience the same life changing programs that deeply impacted his life. You can do so by donating online at www.sook.org/support/donate. Condolences may be left at www.griffinhillcrest.com
To plant a beautiful memorial tree in memory of Travis Harrington, please visit our Tree Store

Look inside to read what others have shared
Family and friends are coming together online to create a special keepsake. Every memory left on the online obituary will be automatically included in this book.
View Tribute Book
Services for Travis Harrington
There are no events scheduled. You can still show your support by planting a tree in memory of Travis Harrington.
Plant a tree in memory of Travis

Share Your Memory of
Travis
Upload Your Memory View All Memories
Be the first to upload a memory!
Share A Memory
Plant a Tree