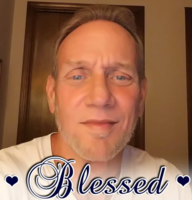 Gregory Phillip Goddard, age 65, passed away on December 15, 2021, in Ardmore, Okla. Services are planned for a later date. Cremation with care under the direction of Griffin ~ Hillcrest Funeral Home and Crematorium. Greg was born on October 11, 1956, to Paul Eugene Goddard, Jr. and Earlene (Freeman) Goddard in Ringling, Okla. He attended and gradated from Ardmore High School in 1974. Greg went to work for K-Mart until he received his welding certificate and went to work as a tank welder at V&E Welding. He then worked for Arbuckle Supply until retiring early to be a caretaker for his elderly parents. He was an avid artist and enjoyed the medium of charcoal and lead. Greg was a faithful member of Tradition Two Group of Ardmore, Okla. He was preceded in death by his parents, and brother, Steve Goddard. Greg is survived by his brothers, Randall Gene Goddard and wife, Shelley Jolene, of The Woodlands, Texas, and Bryan Goddard and wife, Molly, of Lone Grove, Okla., uncle, Rick Freeman of Ardmore, aunt, Patsy Bush of Hazlehurst, MS. and cousins, nieces, nephews and a host of family and friends.