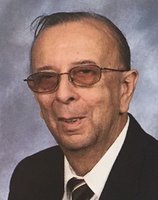 Harvey C. Hensley, age 92, passed away on March 31, 2021, in Ardmore, Okla. Funeral services will be held at 2:00pm, Tuesday, April 6, 2021 in The Chapel at Griffin~Hillcrest, with Dr. Alton Fannin officiating. Private interment to follow in Bossier City, LA. Harvey was born on November 1, 1928, in Freeport, New York, to Charles J. Hensley and Harriett F. (Nathan) Hensley. He served his country in the United States Air Force and was honorably discharged in July of 1956. Harvey lived in Great Bend, Kansas, Bossier City, Louisiana, before moving to Ardmore, Oklahoma. He was a member of the First Baptist Church and enjoyed the Keen Age Choir. He was preceded in death by parents. Harvey is survived by his daughter, Brenda Koskow and his Church Family