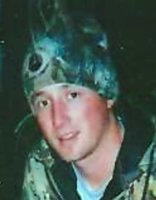 Robbie Levi Peters, age 37, passed away on Tuesday, March 9, 2021, in Ardmore, Okla. A viewing will be held Monday afternoon, from 2:00 PM until 5:00 PM, at Griffin~Hillcrest Funeral Home of Ardmore. A Celebration of Life will immediately follow the visitation at Lake Murray’s Pecan Grove. (1.2 miles South of Lake Country Store on Highway 70) Levi was born December 18, 1983, in Ardmore, Okla., the beloved son of Leo Peters and Billie (Gray) Peters. He graduated from Ardmore High School and lived in Ardmore for most of his life. As a Specialist in the Army National Guard, C-Troop in 11 Bravo Infantry, he served valiantly during Operation Enduring Freedom earning the Army Achievement Medal and National Defense Medal as well as seven other commendations. Levi was a devoted partner and father and was an avid hunter and fisherman. He was passionate about music, especially Guns-N-Roses. He was an amazing artist who loved to draw and paint and excelled at everything he did. To know him was to love him. He will be deeply missed by his family, friends, and all who knew him. He was preceded in death by his Papa, Cary Key, of Ardmore. Levi is survived by his loving partner Taloa Folsom and their three children: Lula Alexander, Jake Alexander, and Raleigh Levi Peters, all of Ardmore. Father, Leo Peters Jr. and Jody Kuebler of Posen, Michigan and mother, Billie Gray and Robert Savage. Siblings, Heather Peters of Thackerville, Okla., and Jeremy Key of Ardmore, He was an adoring uncle to his nephew, Austen McQueen and niece, Jaden Peters, both of Marietta, Okla. Granny, Jewel Dean (Key) Butler and Bill Butler of Ardmore. A multitude of other loving family members and friends. Condolences may be left at www.griffinhillcrest.com.