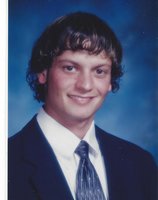 Austin "Colby" Kesler, age 33, passed away on Tuesday, July 28, 2020, at Plano, Texas. Private family services will be held at a later date. Austin "Colby" Kesler was born April 14, 1987, in Ardmore, Oklahoma. He attended Plainview School, graduating in 2006. Colby was involved in every competitive sport available: soccer, baseball, basketball, track, and football. His 8th grade Plainview Track Team set a new State Record in Oklahoma in the Relay Race in which he was a participant. In addition to school sports, he was a member of the Trinity Baptist softball team. The final year he played Church League, he had the privilege of being on the team with his grandfather, Richard Armstrong, who was the team pitcher, and his uncle, Scott Armstrong, proudly representing three generations of his family on the team. The Trinity Baptist team won the championship that year. Colby was licensed in both Construction and HVAC. At the time of his passing, he was employed by a local housing company as the head maintenance man in both of their locations in Ardmore and Pauls Valley, Okla. Colby accepted Jesus as his Lord and Savior at the age of 7 and was baptized at Trinity Baptist Church of Ardmore, where he was a member. At age 16, he attended Falls Creeks Church Youth Camp where he rededicated his life and chose to be baptized again. He now resides in Heaven with the Lord and all his loved ones and friends who preceded him. As an organ donor, Colby will live on through the recipients whose lives were changed forever through his generosity. Left to cherish his memory are his parents, Mike and Robin Armstrong Kesler and step-mother, Shannon McElroy, and Trey McElroy, all residents of Ardmore. Colby also leaves behind two daughters, Ariel Celeste Kesler and Jazzlyn R. Walker, whom he loved with all his heart. Brothers, Connor, Mason, and Kale, and a sister, Rachel, all of Ardmore. He is also survived by his grandparents, Diane Patrick Armstrong and the late Richard Armstrong, Skip and Paula McElroy all of Ardmore, Priscilla Kesler and the late William Kesler of Mandan, North Dakota. In addition, Colby is survived by aunts, Angela Armstrong, Michelle McElroy, Kristi McElroy, and Lori Hoben, all of Ardmore, Connie Barber of Tulsa, Okla., Kathy Howe, Brenda Bry, Cheryl Kesler, and Debby Grueneich, all of North Dakota, and uncles, Scott Armstrong, of Norman, Okla., and Bill Kesler, of North Dakota. He is also survived by a special cousin, Madison Armstrong, who was like a sister to him, and her baby, Charles "Charlie" Oliver Coker of Oklahoma City. Colby leaves behind many great aunts, uncles, cousins and many, many friends including a very special friend and co-worker, Wanda Wynn. Colby will also be greatly missed by his little fur-brother, Chewbacca "Chewy" Kesler. Serving as pallbearers are Connor Kesler, Mason McElroy, Kale King, Rankin Barger, Kirk Phipps, Dillon Lawson, and Will Biddick. Honorary bearers will be Colby's sister, Rachel McElroy, and cousins Newman and Nate Hoben. The family extends their love and appreciation to everyone who lifted them in prayer during this time of tragic loss, those who brought food, sent cards and flowers and reached out in any way, making this time easier to bear.