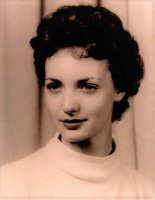 Rena Mae (Lindsey) McPherson passed away on July 11, 2020. Rena was born on March 20, 1939 in Ardmore, Okla., to Guy and Areina (Bell) Lindsey. She was a resident of Ardmore, Okla. most of her life. Rena married Billy Fred Gentry on February 18, 1956. To this union four children were born: Brenda Kay in Ardmore, Okla., Theresa in Midland, Texas, Rick in Midland, Texas, and Judy Diane in Stanton, Texas. Rena was a beautiful and feisty soul who gave all her love and efforts to her children and grandchildren. She cherished her friendships, loved to watch movies and was an amazing cook. She is preceded in death by her parents, husband and two of her daughters: Brenda Kay Gentry Skaggs and Judy Diane Gentry Rowe. She is survived by her daughter, Theresa Gentry, of Ardmore, Okla. and Rick and Rebecca Gentry, of Irving, Texas. She has many grandchildren and great-grandchildren that will miss her greatly. A private entombment was held at Hillcrest Memorial Park Mausoleum in Ardmore, Okla.