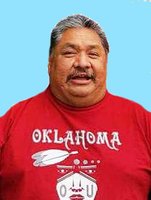 Leonard Leon Brokeshoulder passed away July 15, 2020, in McAlister, Okla. Graveside services will be 10:30 AM, Friday, July 24, 2020, at McAlister Cemetery, Overbook, Okla., with the Reverend Randy Parnacher officiating. Leonard was born on August 29, 1962, to Eugene Brokeshoulder and Frances (Parnacher) Brokeshoulder, in Ardmore, Okla. Leonard attended Ardmore schools and then moved to Ada, Okla., where he graduated from Byng High School Class of 1980. He went to work for the Chickasaw Nation for seven years and then moved to McAlester. Leonard took a position with the Oklahoma Prison System as a cook and became the kitchen supervisor where he has worked to this date. In his youth, he loved to play basketball and later in life he loved to go bowling. Leonard was preceded in death by his parents, wife Wynoka S. Brokeshoulder. He is survived by two daughters; Christina Gore of Ada, Okla., and Chasity Jackson and her husband Ben, of Ada, two grandsons, Spencer Gore and Chaio Jackson, of Ada, sister, Terri Ramirez and husband, Mike, of Midlothian, TX., and one brother, Darrell Brokeshoulder and wife, Janice of Marietta, Okla. Those serving as pallbearers will be; Dustin Brokeshoulder, Brent Underwood, Michael Ramirez, Taylor Kenieutubbe, Truman Kenieutubbe and Russell Colbert.