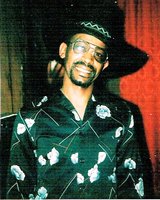 Robert Earl Williamson, age 78, departed his earthly life on May 18, 2020 after a brief battle with cancer, at Ardmore, Okla. A memorial service will be held at 2:00 pm, Saturday, May 30, 2020, in The Chapel at Griffin~Hillcrest. Cremation under the direction of Hillcrest Crematory. Robert was born on December 13, 1941, to Hattie Howard and Hollis Williamson in Ardmore, Okla. He is the youngest of four brothers raised in the union of Hattie and Napoleon (Papa Vib) White. Robert honorably served his country by enlisting in The United States Army Reserve in 1962. He united with Mae Belle Antwine in 2001. They remained faithfully committed to each other until the end. Robert had a diverse skill set which made him “A Jack of All Trades”. Beyond a doubt, his most valued title was that of “Paw Paw”. He is beloved by his grandchildren. He was preceded in death by his mother and stepfather, Hattie and Napoleon White, and father, Hollis Williamson. Brothers: Alfred Douglas and wife, Etta Jean, Sherbert Williamson, and Harrel Dean Williamson and two sisters: Almeda and Velma Williamson. Step-son, Billy Pickens. Robert is survived by faithful wife, Mae Belle, of the home and brother, Andrew H. Pierce, of Oklahoma City, Okla. Daughters: Valerie Jacox of Sacramento, California, and Brenda Williams and husband, Suraj Mohammed of Altus, Okla. Stepchildren: Kent Wright and wife, Kimely of Ardmore, Keith Wright of Milo, Okla., Karen Wright of Oklahoma City, and Carlos Wright of Connecticut. Many grandchildren, great-grandchildren, and a host of nieces, nephews, family and friends.