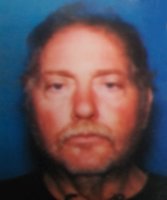 James Alford Cook, Jr., age 58, passed away on March 19, 2020, in Ardmore, Okla. A private memorial service in the celebration of James’s life was held Tuesday, March 24, 2020, in the Chapel at Griffin ~ Hillcrest, with Pastor Richie Baker officiating. He was cremated under the care of Hillcrest Crematory. James was born on June 17, 1961, to James Alford Cook, Sr. and Gloria (Comer) Cook. He attended Lone Grove Schools and went on to attend Murray State College in Tishomingo and graduated with an associate’s degree. He worked as a house painter in Carter County until his health forced him to retire. James liked to junk and reclaim metal and sell it. He enjoyed camping and fishing and loved teasing his sister about OU. James loved to play dominos, spend time with his friends and take his family to the movies and out to eat. He was preceded in death by his parents, sister, Patricia Baker, cousin, Joshua Dale Cook, and Uncle, Butch Cook. James is survived by his daughter, Shyann Rose Cook, and husband, Chas Linderman, cousins, Michael Cook and Allen Cook, nephew, Jason Baker, two nieces; Sandi Baker and Brandy Baker, uncle, Roger Cook, and the mother of his children, Nicole Cryer.