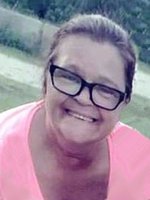 Charlette (Hurley) “Charlie” Upton, age 52, passed away on March 10, 2020, in Ardmore, Okla. A Celebration of Life service will be held at 5:00pm, Monday, March 16, 2020 at The Chapel in Griffin ~ Hillcrest. Charlie was born on January 5, 1968, in Oklahoma City, Okla., to William Dean Hurley and Wynona Faye (Main) Hurley. The family moved to Ardmore where she attended Ardmore City Schools. Charlie married David Upton on May 7, 1986 in Gainesville, TX. The couple returned to Ardmore, where she worked for Ardmore Manufacturing and then The Pants factory. That marriage ended in 2008. She then went to work for Circuit City, where she worked for ten years until it closed. At that time, her health kept her from seeking further employment. Charlie loved to go arrowhead hunting, fishing, camping and spending time with her family. She was preceded in death by her father, two brothers; Gerald Hurley and Billy Hurley and one grandson, Ricky Moore III. Charlie is survived by her mother, Wynona Hurley, of Ada., children: Christina Knight and husband, Michael, Christopher David Upton, his fiancé, Stephanie Kosler, and Shannon Upton. Grandchildren: August Steudeman, Gavin Upton, Jackson Loughridge, and Gracie Upton and two sisters; Debbie Langston and Deana Ray.