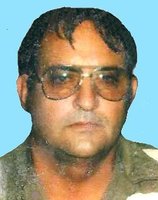 Billy Ray Smith, age 85, passed away on February 22, 2020, in Ardmore, Okla. Graveside services will be held at 2:00pm, Wednesday, February 26, 2020, in Hillcrest Memorial Park. Billy was born in Waurika, Okla., on July 10, 1934, to George Smith and Neil (Edwards) Smith. He married Rita Hattensty in 1956 and from that marriage came their three children. He attended Claypool Schools. He worked for Pruitt Produce and Stromberg Carlson. Billy eventually went to work for the City of Ardmore in Maintenance and retired in the 1990s. He always was a farmer and loved caring for his animals. In his spare time, Billy loved to visit with his family. He was preceded in death by his parents, wife, daughter, Rita Lynn Burton, two sisters, and nine brothers. Billy is survived by his son, Billy Glenn Smith, of Ardmore, Okla., daughter, Desiere Akins and husband, Bobby, of Mannsville, Okla., Special Niece, Shellie Lane Hoffield of Ardmore, eight grandchildren and fourteen great-grandchildren. A visitation will be held from 6:00pm until 8:00pm, Tuesday, February 25, 2020, at Griffin ~ Hillcrest.