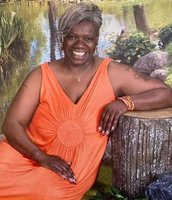 Sheila Denise (Myles) LaDay, age 55, passed away on December 22, 2019, in Ardmore, Okla. Funeral services will be held at 2:00 PM, Saturday, December 28, 2019, at Mt. Zion Baptist Church with The Reverend John Credle officiating. Interment to follow in Clearview Cemetery, Ardmore, Okla. Sheila was born in Lake Providence, LA., on December 14, 1964, to Gloria J. Myles and Clarence Brooks. When she was eight, her family moved to Ardmore where she attended and graduated from Ardmore Schools with the Class of 1984. She continued her education at Murray State College and graduated with an associate’s degree in childhood development. While attending college, she worked for Gloria Ainsworth Childcare. Sheila married Tony LaDay in 1992 and he passed in 2018 of last year. After graduation, Sheila took a position with Little Angels Daycare for a short time and then went to work at First Touch Learning Center until her health forced her into retirement. She loved to play Bingo and watch her shows. She was preceded in death by her parents, her husband, and three brothers: James Curtis Myles, Christopher Myles, and Billy Myles. Sheila is survived by her daughters, Marshiea Alexander and husband, Narvail of Oklahoma City, and Mychshyea Taylor of Ardmore, brothers, Samuel Myles and wife Carla Lee, sister, Tabatha Wright and husband, Joseph, of Ladson, SC. Kenneth Myles and wife, Kimberly Myles, Guy Humdy Jr. of Lawton, Okla., Greg Brooks of Stewart, FL., Clarence Brooks Jr., of Lake Providence, LA., Vernon Brooks of Lake Providence and Michael Brooks of Lake Providence, Gwen Brooks of Detroit, MI., Anglea Seal of Carrolton, TX., and Susan Brooks of Carrolton, TX., and a host of family and friends. A visitation will be held from 6:00 pm until 8:00 pm, Friday, December 27, 2019, at Griffin~Hillcrest.