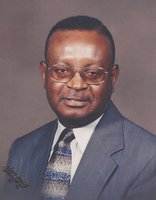 Curtis Lee Stevenson was born to the loving parents of Banks Stevenson, Sr. and Sarah Peters on September 13, 1940 in Hennepin, Oklahoma. Curtis accepted Christ at an early age. He was baptized in 1967 at 2nd Baptist Church, S. W., Washington, D.C.

After graduating from Woodland High School, Curtis joined the U. S. Air Force. His last tour of duty in the U. S. Air Force was with the U. S. Department of Defense (Pentagon) in Arlington, VA. After his honorary discharge, he remained with the Pentagon for 30 additional years. While at the Pentagon, he met Clarice Jefferson in February of 1966 and they were married in September of 1967. Curtis loved being with his family and always enjoyed talking to everyone he met. He made many friends and remained in touch with many of them thru the years. He enjoyed studying his Bible and being in a small Bible study group. He enjoyed traveling with his wife to visit her family on the east coast and other places of interest. He loved golfing, bowling, cooking, watching sports, playing basketball with his children and grandson. He also enjoyed volunteering at the Food and Resource Center, Mercy Hospital and the Soup Kitchen. He loved his church and was so thankful for each Worship Center he attended.

He was preceded in death by his son Curtis, Jr., his parents, two sisters; Maxine Stevenson and Alice Jones, and brother, William Dewey Stevenson.

His brothers and friends will be serving as pallbearers.