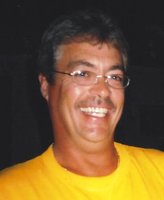 Elmer Lynn Gibson passed away at the age of 59 at Ardmore, Okla., surrounded by his family. Private family services are planned for a later date.

Lynn was born in Oklahoma City, Okla., on January 18, 1960, to Charles E “Sonny” Gibson and Joyce Marie (Short) Gibson. He attended Madill High School and graduated with the Class of 1978. He enlisted in the United States Air Force and served his country until he was honorably discharged in 1983. Lynn married Deonna Richardson in 1985. The couple moved to Reading, England, where he worked for a distributing company for VHS tapes. They returned to the US and lived in Kingston, Okla., where he worked for himself in the roofing business. When his marriage to Deonna ended, he moved to Dallas, Texas, in 1992, where he worked in computer services for local governments, hospitals, and schools. Lynn enjoyed riding motorcycles and bicycles. In 2004, he began participating in cross county running and had been approached to be sponsored to enter the New York City Marathon. He moved to Ardmore in 2004 and returned to work in the roofing industry until his health forced him into retirement in 2014. Lynn married Jonie Yvonne Tune on July 10, 2017.

He was preceded in death by his mother, and two brothers: Michael and Micky.

Lynn is survived by his wife, Jonie Gibson, of the home, two children: Michael Gibson of Arlington, Texas, and Kaci Cluck and husband, Matthew, of Fort Worth, Texas. Two Step Children; Ethan McCollum of Melissa, TX and Ayden Hendershot of Sayre, Okla. Two grandchildren: Alexis and Brianna of Fort Worth. Brother, Joey Gibson and wife, Barbara, of Madill, Okla., and sister, Susie Hernandez and husband, Andres, of Dickson, Okla., and a host of family and friends.