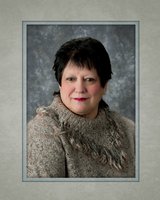 Jon Ann Holland, age 68, passed away on Friday, August 30, 2019, surrounded by her family in Oklahoma City, Okla. Funeral services will be held at 2:00 pm, Friday, September 6, 2019, at Christ Community Church of Ardmore. Cremation services under the direction of Griffin-Hillcrest Funeral Home and Crematory of Ardmore.

Jon Ann was born on December 1, 1950, to John Ira Wommack and Edith Evelyn (Williamson) Wommack at Valley View Hospital in Ada, Oklahoma. She graduated from Byng High School near Ada in 1968.  She attended college at East Central University in Ada where she began dating a fellow student, Eddie. Jon Ann married Eddie Holland on July 10, 1970. The young couple moved to Ardmore in 1973. She began working at Brand Western Wear. When Jimmy Owen opened Jimmy's Western Wear, she went to work for him as a bookkeeper. She then worked part-time as a bookkeeper for the Brown Paper Bag, where she made lifelong friends with the "Baggettes" including her best friend, Sue Fernando. Jon Ann attended Ardmore Cosmetology College. After earning her Cosmetology License, she opened Holland House of Nails so that she could be close to home and customize her work schedule to fit the needs of family. She closed her shop in 2011 to rock her grandbabies.

Jon Ann's greatest joys in life came from being a mom. She found no difficulty in sharing that maternal love with countless little ones throughout the years. Whether she had known you her whole life, or only for the past 5 minutes, Jon Ann always had time to listen and offer a word of advice or encouragement. She was also not ashamed to share her faith with anyone who would listen. She often spoke of heaven as a place she couldn't wait to see, filled with people she couldn't wait to be reunited with.

She was preceded in death by her parents, John and Edith Wommack, sisters: Novella Blake, Denzil Morris, Lahoma Roberts, and Hildrith Jordan.

Jon Ann is survived by her husband of over 49 years, Eddie Holland, of the home. Daughter, Brandi Singleton and husband, Travis, and son, Brent Holland, and wife, Lizzi. Grandkids: Deacon and Linley Singleton and Kagen and Audrey Holland, all of Ardmore. Sisters: Barbara Smith, Juanita Scroggins, and Eula Labass, her besties, The Baggettes, and a host of close relatives and friends.

In lieu of flowers, donations may be made in Jon Ann’s name to The Ardmore Children’s Shelter, 15 Monroe Ave NE, Ardmore, OK 73401.

A family gathering will be held on Thursday evening, from 6:00 pm until 8:00 pm, September 5, 2019, at Griffin-Hillcrest Funeral Home, Ardmore.