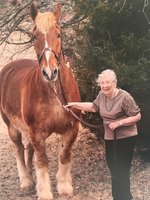 Jane (Caskey) Tuttle, age 90, passed away on Tuesday, August 13, 2019, in Guthrie, Okla. Graveside services will be held at 10:30 AM, Saturday, August 17, 2019, with her daughter, The Reverend Nancy Smalley, officiating at Hillcrest Memorial Park in Ardmore, Okla.

Jane was born in Manhattan, New York, on June 26, 1929, to John Fletcher Caskey and Eleanor (Burch) Caskey. She left boarding school to follow the love of her life, John Tuttle, to Oklahoma where he worked in the local oil fields. John met Jane at the bus station in Madill, Okla., and the young couple were married on October 16, 1948, in Sherman, Texas. Jane was a homemaker and she dedicated her life to her four children. She loved working with Morgan horses and showing them. She was a member of St. Paul’s Episcopal Church of Ardmore until she moved to Guthrie, Okla., to be close to her daughter, Joni, and lived there until her passing.

She was preceded in death by her parents, and husband, John Tuttle.