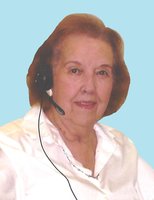 Velda Lucille Adams, age 95, passed away on September 9, 2016, at Ardmore, Okla. Funeral services will be held at 10:30 am, Monday, September 12, 2016, in The Chapel at Griffin ~ Hillcrest with The Reverend Dan Patman officiating. Services will conclude in the Chapel. Lucille was born on November 19, 1920, to Robert L. Keeton and Bonnie (Whitlock) Keeton, at Drumright, Okla. She graduated from Drumright High School in Drumright, Okla. In 1937, she married William Glen Adams. Lucille worked for Southern Vending in the 50’s and in 1971 she took a position at Mercy Hospital as a PBX operator. Lucille was a member of The First United Methodist Church of Ardmore. She was a member of Friendly Neighbors and Wesley Class. She had a passion for making stained glass. She was preceded in death by her parents, husband, W.G. Adams, one sister, Thelma Sollenberger, one brother, Richard Keeton, and a granddaughter, Gigi Dunn. Lucille is survived by two sons, Michael Adams and wife, Susan, of Ardmore, Okla., and Kim Adams and wife Glenda, of Argyle, TX., four grandchildren; Robert Adams, Julie Adams, Eric Adams and wife, Kimberly, Jason Adams and wife Sherry, five great-grandchildren, four nieces and two nephews.