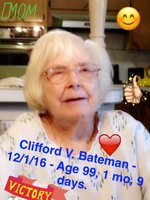 Clifford Vallie Bateman, age 99, of Ardmore, gave up the Ghost and joined our Lord and Savior, Sweet Jesus, on Tuesday, January 31, 2017. Funeral services will be held at 10:30 am, Saturday, February 11, 2017, at The Chapel at Griffin~Hillcrest. Interment will follow at Hillcrest Memorial Park, Ardmore, Okla. A daughter of the late Benjamin Franklin Thomason and Catherine Elizabeth “Lizzie” (Mize) Thomason. Clifford was born on October 22, 1917, at Kingston, Okla. Clifford Thomason was married to William Francis Bateman on November 13, 1937, in Tishomingo, Okla. Clifford spent many years providing an excellent home for her husband and son. She was a homemaker, ranch foreman, and a farm girl, not a little bit country. Clifford’s passions included cooking and visiting with family and friends. They managed the Pug Croskell Ranch in Gene Autry in 1947 to 1948. They were partners with a Croskell son in the Madill Implement Company before purchasing a small farm and ranch at Powell, Okla. William went to work as a John Deere mechanic and Clifford become a homemaker and ranch foreman raising peanuts, cotton and Hereford cattle. They donated an acre of land to build the Powell Church of Christ and with a few friends and family; it was built in 1953 and dedicated in 1954. She taught as a substitute teacher at Powell Schools during her thirties and was a Sunday School teacher for 20 years at the Powell Church of Christ. In 1971, the Batemans moved to Ardmore and were members of the Northeast Church of Christ which is now the McLish Church of Christ. She was preceded in death by her parents, husband, William in 2004, two sisters: Ruby Sullivan and Mae McAlester, and two brothers: Mearl Thomason and Virgil Thomason. Clifford is survived by her son, Jerry Bateman and wife, Janet, of Ardmore. Grandson, Terry Bateman of Ardmore, granddaughters: Lisa Koehn and husband, Brad, of Piedmont, Okla., and Teresa Henson and husband Hoyt of Edmond, Okla. Seven great-grandchildren: Heather Gaddy and husband, Bryan, of Davis, Okla., Ethan Bateman and wife, Camille, of Ardmore, Collin Koehn, Emily Koehn, Noah Koehn, all of Piedmont, Okla., and Savanna Henson and Cierra Henson, both of Edmond, Okla. In addition she was survived by two great-great-grandchildren: Brytan Gaddy and Brylan Gaddy and one on the way, all of Davis, Okla. Numerous nieces, nephews, extended family, and friends. Serving as pallbearers will be Terry Bateman, Theodore Epps, Ethan Bateman, Lee Stone, Collin Koehn, and Darrin Castleman. In lieu of flowers, the family would ask that you follow Christ into the streets, hedges, lanes, and highways, and on opportunity when you see the poor, the needy, the hungry, the oppressed, just give them a helping hand up. Psalms 2:12, Mathew 25:34-40