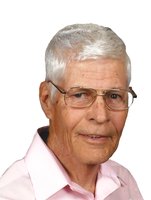 William Clarence “Bill” Simmons passed away at the age of 81 on Monday, January 18, 2016, at Ardmore, Okla. Memorial services will held at 10:00 am, Friday, January 22, 2016, at Emanuel Baptist Church of Ardmore Okla., with Pastor Donny Custar officiating. Cremation services under the direction of Griffin~Hillcrest. Bill was born on November 2, 1934, in Oklahoma City, Okla., to William Clarence Rose and Ernestine Weichart. Following their divorce, Ernestine married William C. Simmons who adopted Bill at the age of 7 and the family moved to Arkansas City, Kansas. He attended and graduated from Arkansas City Schools and took a position with Total Refinery. Bill was drafted into the service and served in the 82nd Airborne out of Ft. Bragg, North Carolina, and was honorably discharged and returned to work for Total. He married Miss Delores Sue Hurst on August 23, 1973, at Arkansas City, Kansas. He continued to work at Total for 43 years and retired in 1995. Bill has been an avid golfer for many years. He always loved to read the Bible. Bill and Sue moved to Ardmore in 1997 and they are members of Emmanuel Baptist Church. He was preceded in death by his parents and one brother, Ed Rose. Bill is survived by his wife, Sue Simmons, of the home, one daughter, Terry Ruth (Simmons) Kreutzer and husband, Tim, of Wichita, Kansas, and one son, Rafe Simmons, of New Jersey. One step-daughter, whom he raised as his own, Kimberly Determan, and husband, James, of Arkansas City, Kansas. Honorary Pallbearers will be his golfing group the “Scabs”.